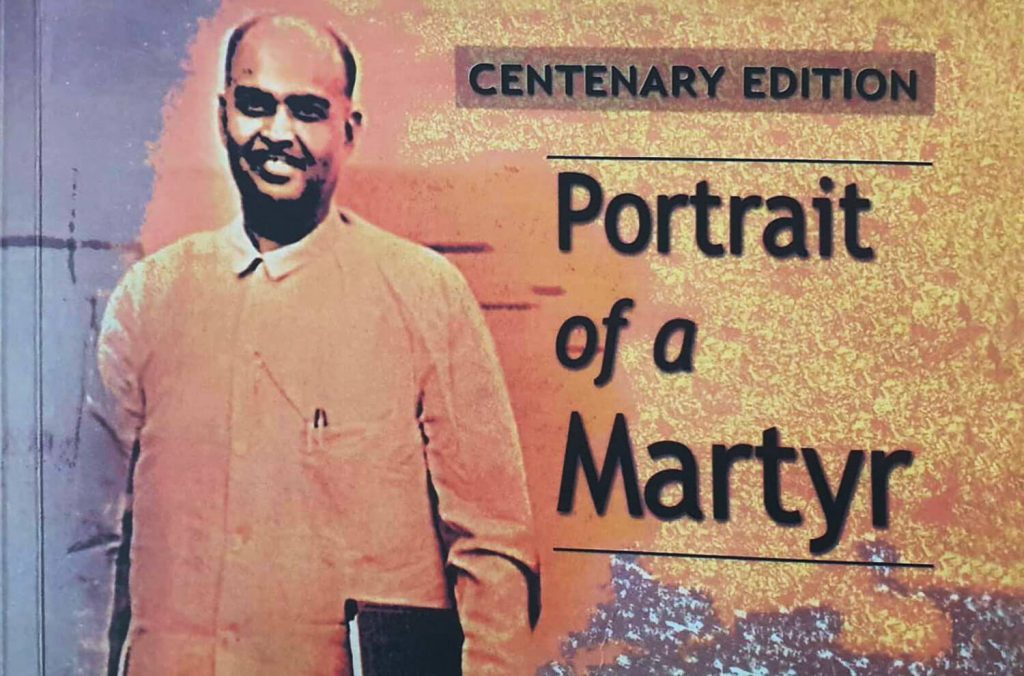 Dr. Mookerjee as Central Minister in the First National Government of India

Dr. Mookerjee was given the important portfolio of  Industry and Supply. Personally he preferred  Education which was his special field and would have laid a sound foundation for a truly National Education Policy.

Maulana Azad who knew nothing about education, Indian culture, and heritage was made education minister. There was a hidden agenda behind that and for 15 years it gave free hand to leftists and Muslim fundamentalists to mold their support base.

Mookerjee was Finance minister of Undivided Bengal, and his record of two and half years as Minister of Industries is remarkable and noteworthy. The Chittaranjan locomotive factory, Sindri fertilizer corporation, Hindustan aircraft factory, Bangalore. were conceived and organized by him. The New Model Third Class Coaches of the Indian railway manufactured by Hindustan aircraft factory was also his contribution.

He initiated the policy of managing the state-controlled industries through Corporations, organized in the lines of Joint-stock companies. He was all for profit sharing between capital and labor.

The exit of  Mookerjee from the cabinet was welcomed by independent-minded congressmen H.V.Kamat and others. Pandit Hrydaynath Kunzru was one of them. The parliament which was also the constituent assembly was elected  indirectly by the provincial legislature

In 1946. At that time the Congress stood for Akhand Hindustan and so captured all Hindu seats. So Mookerjee was the only solitary member in the opposition. After some time his colleagues in the cabinet. K.C.Neogy And John Mathai also joined him. But soon after they left active politics.

The  Socialist Party Of India under the joint leadership of J.P.Narayan And Acharya Narendra was there but their basic approach was the same as that of Nehru’s Congress. The Rama Rajya Parishad was another organization making some headway in Rajasthan and Madhya Bharat. They were feudalistic and conservative.

Hindu Mahasabha was there but Mookerjee had outgrown the organization. After the assassination of  Gandhi, the party in power exploited the situation to suppress all its real or imaginary, actual or potential rivals. RSS the best organized and disciplined non-political national organization of Hindus was banned. Some of the Mahasabha leaders were arrested. And its existence as a political organization came to be threatened. In 1949 RSS filled the prisons of free India with about a  lakh of young men. The government yielded to lift the ban on RSS. RSS had its strength from the lower middle and working class.

Mookerjee wanted  RSS support for establishing a political party. In RSS there was no unanimity for forming a political organization. They feared that politics would corrode idealism and the spirit of selfless service to society. Younger elements in RSS wanted to form a party. RSS delay in forming the party irritated

Dr.Mookerjee  and he was ready to go alone. Ganathanta Parishad In Orissa and many other elements in Bengal and elsewhere were pressing him to form the party. The delay in forming Jan Sangh caused the loss of support of these people.

IN early JANUARY 1951 the following people met for forming a party.

To begin with, party formation was to be done in Punjab, Pepsu, Himachal  Pradesh, and Delhi.

Dr.Mookerjee  attended this meeting and stressed the need for the formation of an All India party at an early date. He said that he can form a party in West Bengal. in this meeting, the party’s name was proposed as Bharatiya Jansangh- Indian People’S Party.

A convention of  300 representatives from Punjab, Pepsu, Himachal Pradesh, and Delhi was called at Jalandhar on 23rd may 1951 to form a party for the contiguous states. L.Balraj Bhalla who was sentenced to exile for life in connection with HARDINGE BOMB CASE  was elected as First president and Prof. Balraj Madhok as secretary. Jansangh for West Bengal was formed and Dr. Mookerjee was first president. Similar conventions were held in Lucknow For Uttar Pradesh and Indore at Madhya Bharat. Deen Dayal Upadhaya was selected as the first general secretary of Uttar Pradesh and RAO KRISHAN PAL SINGH as president.

An All India convention was held on  21st October 1951, by prof. Balraj Madhok as convenor. Before this convention, provincial conventions were held at Jaipur, Nagpur, Patna. So Jan Sangh came into existence in all states of north India except Assam and Vindhya  Pradesh. Jansangh’s symbol was the earthen ’PRADIP’

Dwaraka Prasad Mishra, the ex-home minister in the Congress ministry of Madhya Pradesh, resigned from Congress and he started his own party Lok Congress.

DR. Mookerjee’s approach to the economic problems was not colored by any textbook maxims or pet theories. He was for profit sharing as the only practical means of making the labor interested in increasing production, was the first essential for solving the economic problems of the country. The doctrine of Live And Let Live is Bharat’s message. Mookerjee wanted to quit the commonwealth because of great Britain’s partiality towards Pakistan. Bharatiya Jan Sangh wanted that the Kashmir case should be withdrawn from UNO and plebiscite not to be allowed. Jansangh wanted electoral understanding with opposition parties of a similar approach. He met Swami Karpartriji of Rama raja Parishad at Benares and also leader of the Hindu Mahasabha.

Just to win cheap popularity from foreigners, Nehru betrayed the Hindus of Pakistan to whom he had given solemn pledges on the eve of partition. According to Mookerjee the success or failure of a country’s foreign policy was the good it might have done to the country. Pakistan used the strategic region of Giljit as a bargain counter for getting military and diplomatic support from Anglo Americans. No single man has done more harm to the country than Pandit Nehru. Mookerjee has salvaged parts from the wreck congress surrendered at the feet of Muslims and communists for a period of 35 years before independence. They did not fight against the communal award. Pandit Nehru not only has not discovered real India, he had not discovered his own mind and also what is Un-Indian and Un-Hindu.

JAN SANGH  had only three members in the first parliament. The Jansangh was formed two months before the election. They have contested 93 seats. Nehru’s opponent penny less Bramha Chari Prabhu Dutt secured 30% of the total votes polled. Sheikh Abdullah sent government jeeps and party workers all the way from Kashmir for Pandit Nehru’s election propaganda. Barrister U.M.Trivedi was one of other two JanSangh M.P’s

In, state legislatures, it contested 742 seats and 33 were elected. In East Punjab, it did not win a single seat. Ballot papers were tampered while under government custody. It was admitted by Nehru in parliament. Congress and the communists were the richest parties in the country. Congress has entered electoral arrangements with Muslim League In Madras. In Punjab, Hindus were fearing the separatist demand of Akalis and en-bloc voted for the congress. The electoral arrangement of Akali’s and JanSangh in Delhi was used by the congress to tarnish both the parties in Punjab .170 million voters went to the poll and it was the most gigantic democratic experiment in the world.

CONGRESS HAS NOT WON THE POLLS, BUT THE BALLOT BOXES was the comment of Mookerjee.

THE ELECTION COMMISSION recognized JAN SANGH as one of the Four all India parties on the basis of the number of votes polled. The opposition secured more than 55% of the total votes polled. Congress got 44.63%. Yet congress won 364 seats against 125 of the entire opposition.

J&K members nominated by Sheik Abdulla and not elected.

The president appointed Anglo Indians and tribal Assamese. Socialists And Kisan Mazdoor Praja Party merged to form Praja Socialist Party making total numbers 22. The socialists had an alliance with Communists in 1935- 40. The communists wanted to ally with socialists, but they spurned the offer because of past bitter experience so the opposition was badly divided.

None of the top leaders of communists, socialists, and KMPP has won. Mr. Mookerjee was the chief spoke man of opposition in the first elected government. The Non-communist parliamentarians decided to form a combined opposition on the basis of Minimum Common Programme. At first, there were 45 members, but some members withdrew because of the fear of Nehru’s displeasure. The National Democratic Party had only 30 members.

The new parliament had no recognized opposition. Partial recognition was given to parties or a combination of more than 25 members as parliamentary groups. PSP members were ready to accept  Mookerjee as an opposition leader with the condition to drop Hindu Mahasabha members. But he was not ready for the same. PSP was not a homogeneous party. There were extreme leftists of the Marxist brand and also sober nationalists like Nath Pai.

On resolution of  Linguistic States, on 7th July 1952, Mookerjee asked Nehru to take initiative in his own hands. Nehru allowed things to drift till the Martyrdom Of Potti Sri Ramalu and afterward appointed a commission to reorganize the states. Mookerjee opposed the Preventive Detention Act on 2nd August 1952. The principle of detention without trial was against his love of democracy and freedom. The entire opposition supported him and Dr.K.N.Katju the Home minister piloting the bill was completely floored.

Nehru’s views and approach to national problems were particularly utopian and unrealistic. Both Sardar Patel and Mookerjee were practical men, deeply rooted in the soil of India. Sardar Patel did not withdraw from the cabinet at the time of Mookerjee’s resignation, because he knew that it would be the end of Congress. Love for the organization, kept him tied to Nehru against his better judgment.

Vindhya Pradesh*
These are territories of the princely states in the eastern portion of the former Central India agency Union of Baghelkhand and Bundelkhand states.