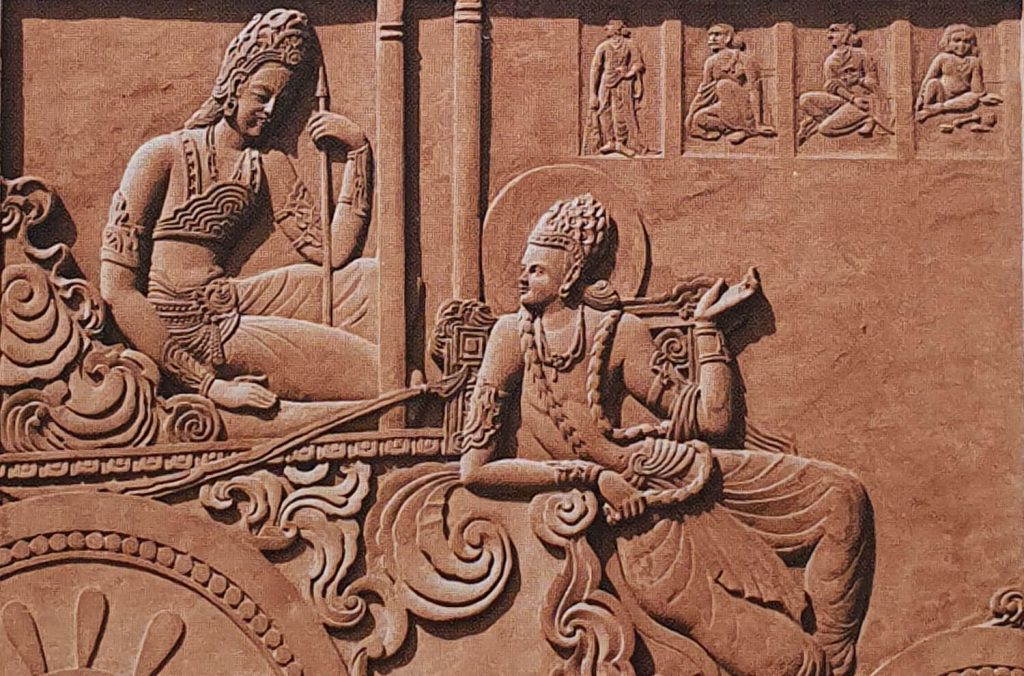 Reviewed By Vathukkat Krishnan Kutty.  This book written by Dr. K.S.Radhakrishnan is a thought-provoking one and was first published in parts in Mathrubhumi Sunday supplement.  The author wanted to write a book on Mahabharata in English based on the translation of Kodungallur Kunhi Kuttan Thampuran and the English work of Kisiri Mohan Ganguly. This was written at the request of Mathrubhumi editor Mr. Srikant Kottakkal.

DR.K.S.Radhakrishnan has approached the work logically with a researching eye and give us surprisingly new meanings and peeps into the real Vyasa Bharata..we have not understood even one percent of what Vyasa has meant. This book is a pointer, door towards understanding the big forest of Vyasa Mahabharata. it was writer Ponchikara Rafi who described Mahabharata writing as the creation of the second world. The author refutes Kuttikrishna Marar’s contention that the weak can resort to Adharma. Even if one is strong or weak, one should not resort to ADHARMA. That is what Mahabharata tells us. Mahabharata is an  ITIHASA  and not history. Markandeya of mahabharata has no death.He is beyond time. one cannot write history based on individuals and situations beyond time. history is always time and place-bound. Markandeya is witness to Yuga’s starting and ending. Mahabharata is a commentary on Brahma Sutra With specific examples. Mahabharata describes people who do anything to get power, money, status, and fame and its tragic ends. one has to follow dharma to have a calm and quiet life. Mahabharat’s main message is not to have war.  peace is the only eternal. Bhishma’s advice is the same. No war can be dharma yuddha it is the message Kurukshetra war gives us. war is compared to gambling by Bhishma. 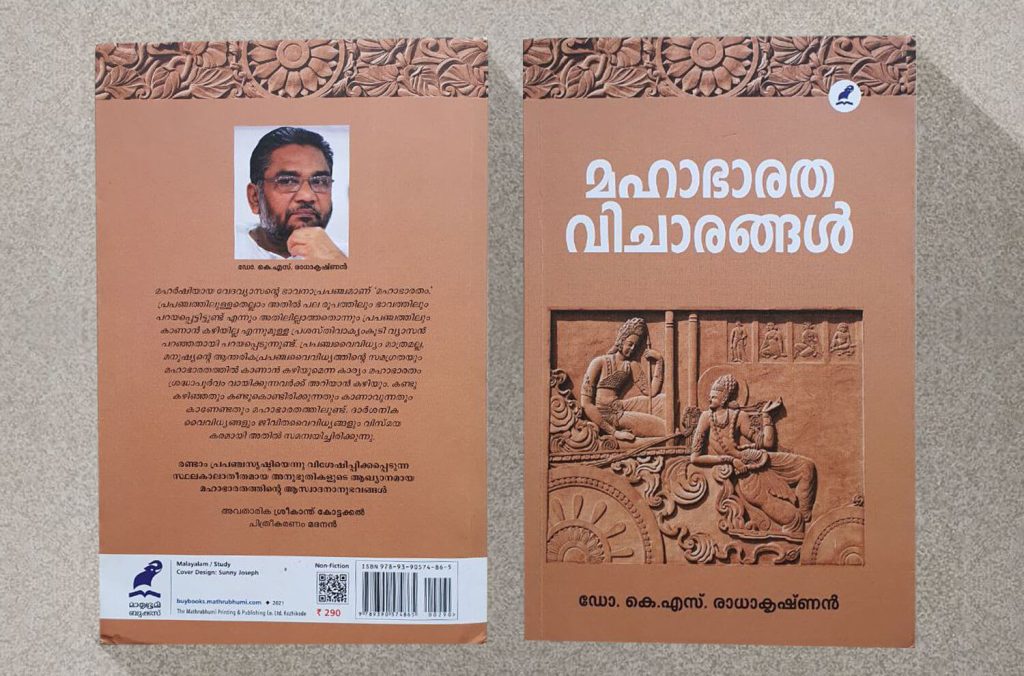 The only person who follows dharma in Mahabharata is Vidura. Bhishma, Drona, Kauravas, Arjuna, Bhima  Yudhishthira all have followed ADHARMA. Following Satya and ahimsa is dharma. The opposite is Adharma. Thinking and telling lies is ahimsa..we get many gems of knowledge from this book. Vyasa has no partiality towards any one of his characters.

A partial gift is a non-gift. It is not Dana. Whatever having, giving it all with happiness is real dana. A thing which s not useful to us, not earned in a proper way, giving the same to another is not dana. Accepting such things as dana is also wrong. All stories, big stories, sub-stories of Mahabharata proclaim the greatness of Nishkama karma. Vyasa tells stories not just for the sake of it, but for clearing things.

Gambling, hunting, drinking, adultery are to be avoided by the king. king can take only one-sixth of the produce as tax. King or Kshatriya is not the owner or slave of the country. He is the only protector. he has to be self-sacrifice for protecting the country. He is not a taker but has to be a giver. he should not seek power. a brahmin can only advise the king, he cannot be king.

One who heard, one who saw, one who knows is a witness. A truthful witness cannot be silent. knowing the truth and not telling it is a sin. Ahimsa paramo dharma is first advised in Mahabharata by a rat snake.

When we discuss Mahabharata, we give importance only to Kauravas, Pandavas, the war, and Bhagavad Gita. Mahabharata is much more than that.it is a treasure trove of stories on dharma, nishkama karma (Non-Attachment) there are 30 chapters in this book excluding the introduction and preface. Each chapter gives you a new outlook on characters, situations, and stories. The prominent stories in this book are the following.

Because of half-lie, Yudhishthira had to visit Naraka (HELL)all kings are to see Naraka. Vyasa opines about Yudhishthira’s Naraka visit. Birth and death do not dictate man’s accomplishments. Non -attachment is the basis and crux of life, Vyasa sends his son Suka to learn from king Janaka.When Karna considers the epithet Suta Putra as an insult, Sri Krishna is ready to work as a charioteer and also messenger. The only person who did not wish for war and wanted to avoid it and worked for the same is Sri Krishna. This book is a must-read to search and know the inner meanings of the ITIHASA.