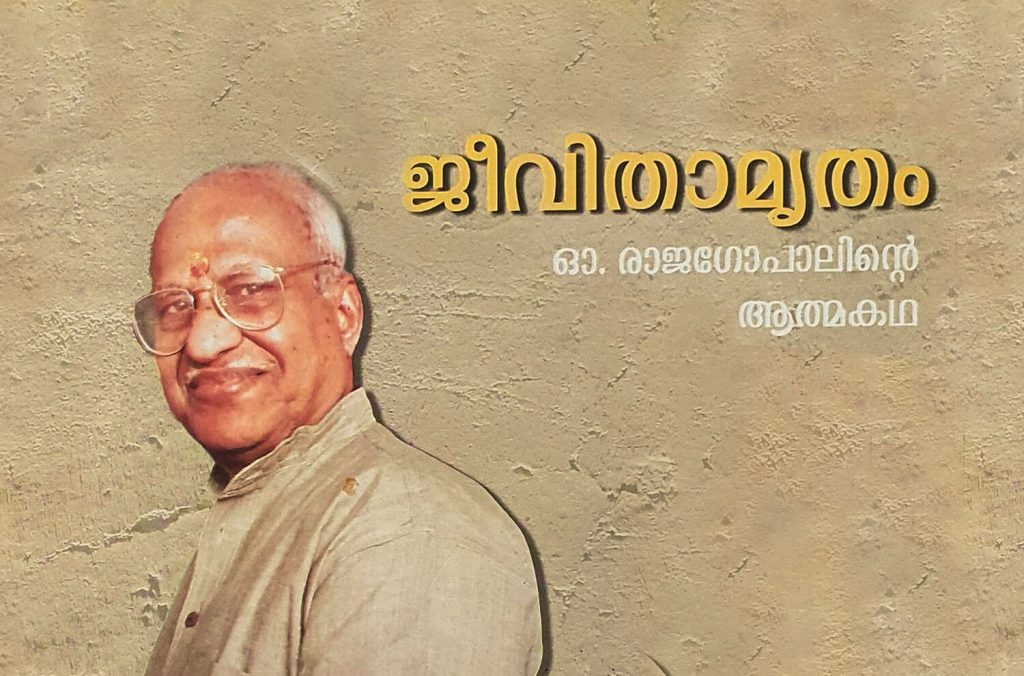 This autobiography of Shri O.Rajagopal in Malayalam is more about Bharatiya Sanskriti than his personal life. He has described his life events in short and have given more importance to the organizations he was attached with like Nair Service Society, Cherukida Karshaka Sangham (Small Farmers Association), The Bharathiya Jansangh, The Janata Party, The Bharatiya Janata Party And The Rashtriya Swayam Sevak Sangh.

It is a true account of his life history with no glorification, no resentment towards his backstabbers in politics and give full credit to his mentors both in the political and spiritual field. He can be termed an Ajatasatru, a karma yogi who sacrificed his family life at the altar of service to the nation.

O.Raja Gopal came to NSS through his Senior Advocate Krishnan Kutty Achan. He came into contact with Shri Chinmaya Nanda swami also through his senior only. There was a meeting between Shri guruji

And swami Chinmaya Nanda at the house of Palakkad district RSS sangha chalak Advocate Eachara Menon. Advocate Eachara Menon’s family was relatives of DR .shanta kumari w/o. Mr Raja Gopal. in this meeting Rajagopal has accompanied swami Chinmaya Nanda. it was the first meeting.Second time he met Shri Guruji at Patayi Kara Mana,Edathara,Parali,Palakkad. At that time Sri Guruji was under

Ayurvedic treatment. Guruji used to come to Kerala twice a year for participating in officers training course(OTC) of RSS. During one visit Rajagopal accompanied him from Palakkad to Kozhikode.

Though jansangh was organized in Kerala in 1958, Rajagopal came into contact with the organization in May 1962 Through K.Raman Pillai who was in charge of Palakkad, Thrissur districts. It was advocate T.R.Rajagopal who introduced Raman Pillai to O.rajagopal.O.raja Gopal met DeenDayal Upadhyaya and Jagannath Rao Joshi in the jansangh office. In 1962 October there was a state study camp of Jansangh at Kozhikode. Even though Rajagopal was not a member, he was invited to the camp. After the camp, he took membership and was made state general secretary in 1962 December.

On 11th. February 1968 DEenDayal Upadhyaya was murdered at Mughal Sarai by unknown assailants and as a dedication to the departed leader, he became a full-time worker. Integral Humanism Of Deen Dayal Upadhyaya was officially accepted as the ideology of jansangh at National Convention Of 1965 January at Vijayawada. Instead of the first-past-the-post system (FPTP OR FPP), proportional representation with a list system which was prevalent in Germany was recommended by Deen Dayal Ji.

Mr Rajagopal is recommending a change in the working of the parliamentary system after 50 years of public service, 12 years experience as a member of parliament, five years as parliamentary affairs minister and dealing 5 different departments, petitions committee chairman, opposition deputy leader of raja sabha etc.

In Kerala anti-Malappuram district formation agitation, TaLi temple agitation were led by the jansangh.in 1971 the CPM started The Talassery communal riot and the blame was put on jansangh. Old big Mosque of Pinarai was destroyed by the CPM.in 1970 jansangh agitated against border check posts.

Emergency was declared on 26th June 1975 and all opposition leaders and workers were arrested.R.Balakrishna Pillai And K.Sankara Narayanan Who were in jail and against emergency changed their stance and got ministership. The CPM did not join the opposition against emergency. They fought only against the reduction of Bonus. It was after an emergency the murderous politics of CPM was unleashed in Kerala.

In January 1977 Indira declared the election and on the same day, Jaya Prakash Narayan declared the formation of Janata Party. The election was conducted in march 1977.The party’s symbol was the wheel and plough carrying farmer.No party wanted to dissolve their units but as respect towards Jaiprakash Narayan, it was done. Thus Janata party was formed. 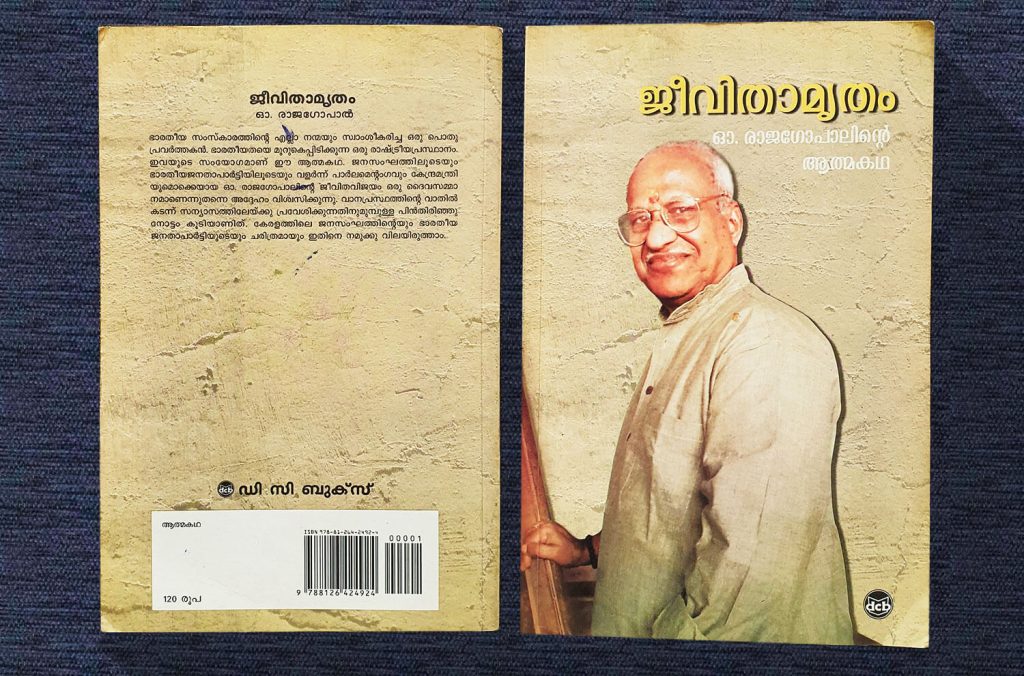 O.v.vijayan, Ayyappa Paniker and Vilopilli Sreedhara Menon were against the emergency. Sukumar Azhikode supported the emergency. After the Janata Party came to power there arose a rift regarding the Dual membership of former jansangh members with the RSS.the dual membership question( jansangh members having connection with Rss) was raised by the Lohaite socialists like Madhu Limaye and Raj Narain.

Jansangh’s merger with the Janata party was suicidal, especially in Kerala. The Jana Sangh members had to work along with the communists as Janata party members and anti-communist supporters of the party deserted the party. Before merging there were 30 full-time workers of Jana Sangh in Kerala. These people’s expenses were met by the party..with the merger many left politics.

On April 4th 1980 Janata party national executive passed the resolution of non-dual membership with one vote majority. as result on 6th April 1980 Bharatiya Janata Party was formed. Though the Jansangh had the upper hand, they did not put demand or claim on the Janta party’s properties or premises and started the party from scratch. Organisation congress leader Sikandar Bakth, Rajamata Vijay Raje Sandhya, Ram Jeth Malani, Socialist Leader Arif Beg were the non-jansangh people who joined the new party.

On 17th April 1980 at Cochin Kerala BJP was formed.O.rajagopal was elected as the first president.

Vishal Hindu Sammelan was organized on 4th April 1982. It was inaugurated by Swami Chinmayananda. It is in this meeting Ramayana month celebration was decided.it was p .parameswar a who proposed it.1986 was a turning point for O.Rajagopal as he was brought to national politics as All India Secretary in charge of Tamilnadu, Pondichery and Karnataka. In 1992 he became raja Sabha mp from Madhya Pradesh.

On 10th September 1992 after midnight he along with his wife was given Mantra Deeksha by Mata Amruthananda Mayi.

Contribution Of O.Raja Gopal As A Central Minister To The State Of Kerala.

In 1999 October 13, in the second full cabinet of Vajpayee under NDA, O.Raja Gopal became state minister for Law And Justice. Ram Jethmalani was cabinet minister. It was during the period October 14 1999 to 22nd July. Originally party has selected p.parameswaran for the post. But he declined the offer and Recommended Rajagopal for the post.THus raja Gopal became minister, In this context, it should be remembered that Nanaji Deshmukh of jansangh has also declined the Cental cabinet minister post offered by Morarji Desai.

AT that time there was no high court or its bench in the capital city of Trivandrum and Bhopal and all other capital cities were having. In Bhopal, it was done.DUe to opposition of vested interests from Kerala. Trivandrum did not get its due share. for the first time translation of the constitution of India into Malayalam was approved.

The next appointment was as State Minister For Parliamentary Affairs. From 25th July 2000 to 22nd May 2004. Mr.pramod mahajan was cabinet minister.from 1st September 2000 additional Department of Railways was given to him. During his tenure of 22 months as railway minister, he has contributed to the following.

These are the salient points in the life of o.rajagopal as a politician and minister.

Many points have been omitted due to the constraint of space.

This book is a must-read for Keralites to understand which party is a benefactor to them.